Existing-home sales in May were snagged by supply, the National Association of REALTORS® (NAR) reports. Activity in May declined 0.4 percent to 5.43 million, down 3 percent from the prior year. Inventory increased 2.8 percent to 1.85 million, but was 6.1 percent lower than the prior year.

“Closings were down in a majority of the country last month and declined on an annual basis in each major region,” says Lawrence Yun, chief economist at NAR. “Incredibly low supply continues to be the primary impediment to more sales, but there’s no question the combination of higher prices and mortgage rates are pinching the budgets of prospective buyers, and ultimately keeping some from reaching the market.” 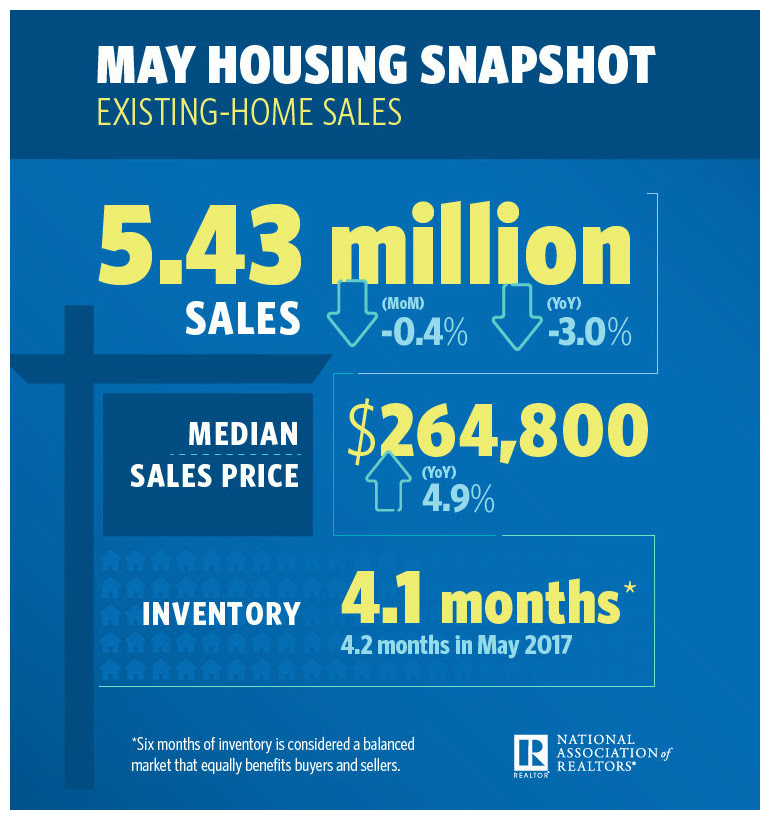 Currently, inventory is at a 4.1-month supply. In May, existing homes averaged 26 days on market, one day less than the prior year. All told, 58 percent of homes sold were on the market for less than one month. “Inventory coming onto the market during this year’s spring buying season—as evidenced again by last month’s weak reading—was not even close to being enough to satisfy demand,” Yun says. “That is why home prices keep outpacing incomes and listings are going under contract in less than a month—and much faster—in many parts of the country.” “REALTORS® in many parts of the country say their seller clients are dealing with a seesaw of emotions when deciding to put their home on the market,” says NAR President Elizabeth Mendenhall. “While they’re thrilled that they will immediately find multiple buyers interested in their listing, many fear they’ll have extreme difficulty finding another home to buy. Some have even decided to hold off until inventory conditions start improving, which is actually only exacerbating supply shortages.”

In May, the metropolitan areas with the fewest days on market and most realtor.com® views, according to realtor.com’s Market Hotness Index, were Midland, Texas; Boston-Cambridge-Newton, Mass.; San Francisco-Oakland-Hayward, Calif.; Columbus, Ohio; and Vallejo-Fairfield, Calif. The median existing-home price for all house types (single-family, condo, co-op and townhome) was $264,800, a 4.9 percent increase from the prior year. The median price of an existing single-family home was $267,500, while the median price for an existing condo was $244,100.

Additionally, first-time homebuyers comprised 31 percent of existing-home sales, down from 33 percent in April. “The abrupt hike in mortgage rates this spring, along with price appreciation and competition being the strongest in the entry-level part of the market, is why first-time buyers are not as active as they should be and their participation remains below its historical average,” says Yun.