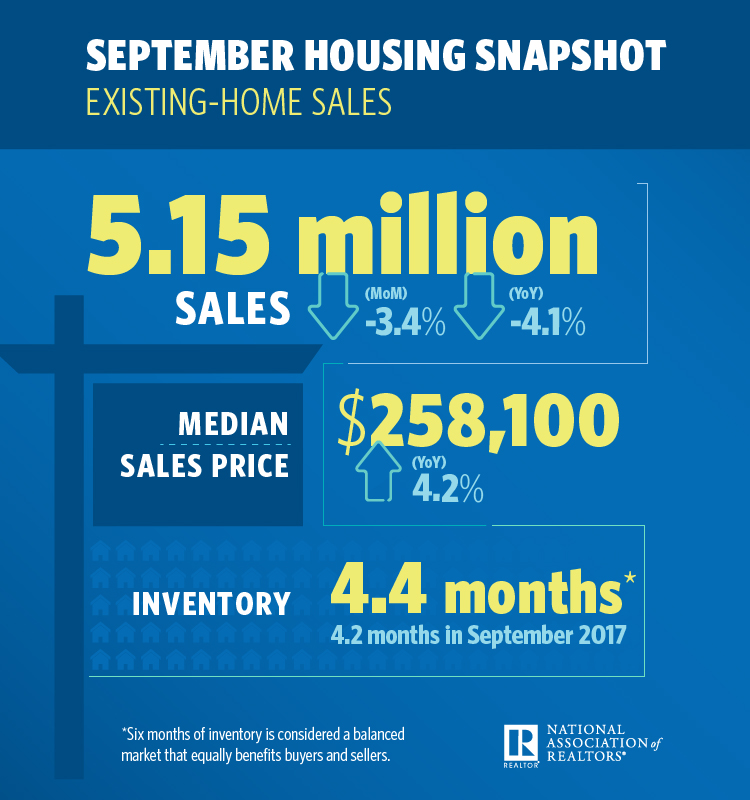 Lawrence Yun, NAR chief economist, says rising interest rates have led to a decline in sales across all regions of the country. “This is the lowest existing home sales level since November 2015,” he said. “A decade’s high mortgage rates are preventing consumers from making quick decisions on home purchases. All the while, affordable home listings remain low, continuing to spur underperforming sales activity across the country.”

Total housing inventory at the end of September decreased from 1.91 million in August to 1.88 million existing homes available for sale, and is up from 1.86 million a year ago. Unsold inventory is at a 4.4-month supply at the current sales pace, up from 4.3 last month and 4.2 months a year ago.

“There is a clear shift in the market with another month of rising inventory on a year over year basis, though seasonal factors are leading to a third straight month of declining inventory,” said Yun. “Homes will take a bit longer to sell compared to the super-heated fast pace seen earlier this year.” Realtor.com®’s Market Hotness Index, measuring time-on-the-market data and listings views per property, revealed that the hottest metro areas in September were Midland, Texas; Fort Wayne, Ind.; Odessa, Texas; Boston-Cambridge-Newton, Mass.; and Columbus, Ohio.

“Rising interests rates coupled with increasing home prices are keeping first-time buyers out of the market, but consistent job gains could allow more Americans to enter the market with a steady and measurable rise in inventory,” says Yun.

First-time buyers were responsible for 32 percent of sales in September, up from last month (31 percent) and a year ago (29 percent). NAR’s 2017 Profile of Home Buyers and Sellers – released in late 20174 – revealed that the annual share of first-time buyers was 34 percent. “Despite small month over month increases, the share of first-time buyers in the market continues to underwhelm because there are simply not enough listings in their price range,” said NAR President Elizabeth Mendenhall. “Entry-level homes remain highly sought after, as prospective buyers are advised to contact a Realtor® as early in the buying process as possible in order to ensure buyers can act fast on listings that catch their eye.”

NAR said all-cash sales accounted for 21 percent of transactions in September, up from July and a year ago (both 20 percent). Individual investors, who account for many cash sales, purchased 13 percent of homes in August, unchanged from July and down from 15 percent a year ago.

- In the Midwest, existing-home sales remained the same as last month at an annual rate of 1.28 million in September, but are still down 1.5 percent from a year ago. The median price in the Midwest was $200,200, up 1.9 percent from last year.