Existing-home sales kept up momentum in November, climbing 1.9 percent to 5.32 million, the National Association of REALTORS® (NAR) reports. On an annual basis, however, sales were sluggish: 7 percent lower than in November 2017. 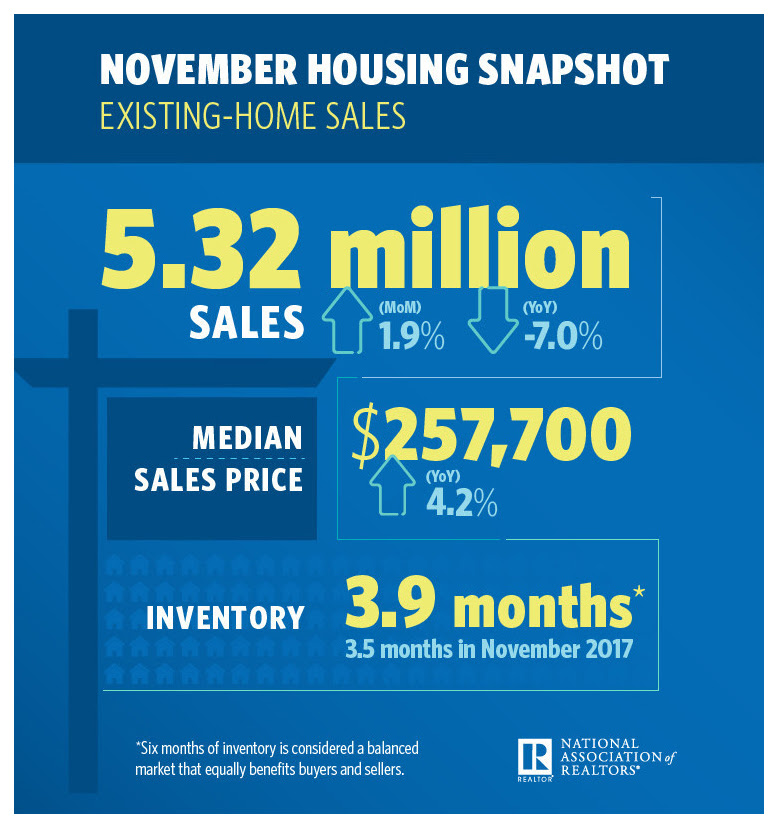 In an improvement, inventory rose to 1.74 million year-over-year, according to NAR; last November, inventory totaled 1.67 million.

“The market conditions in November were mixed, with good signs of stabilizing home sales compared to recent months, though down significantly from one year ago,” says Lawrence Yun, chief economist at NAR. “Rising inventory is clearly taming home price appreciation.”

Existing-home sales fell in the West, sliding 6.3 percent to 1.04 million, with a median price of $380,600. “A marked shift is occurring in the West region, with much lower sales and very soft price growth,” Yun says. “It is also the West region where consumers have expressed the weakest sentiment about home-buying, largely due to lack of affordable housing inventory.” According to Yun, development is needed, and overdue, at practical prices.

“Inventory is plentiful on the upper-end, but a mismatch between supply and demand exists at affordable price points,” says Yun. “Therefore, facilitating real estate development of affordable housing units in designated Opportunity Zones can provide better housing access in addition to boosting the local economy.”

Currently, inventory is at a 3.9-month supply, NAR reports. Last month, existing-home sales averaged 42 days on market, two days more than the prior year. All told, 43 percent of homes sold were on the market for less than one month.

“It is not surprising to see homes remain on the market a little longer,” says John Smaby, 2019 NAR president. “Buyers can often negotiate a more favorable price in those circumstances, especially when paired with a motivated seller and the aid of a REALTOR® familiar with their local market.”

Month-over-month, sales in the single-family space ticked up to 4.71 million, but remained 6.7 percent under year-over-year, according to NAR. Condo and co-op sales totaled 610,000, a 1.7 percent increase month-over-month, but a 9 percent slump year-over-year. Twenty-one percent of sales were all-cash, with 13 percent by individual investors, NAR reports. Two percent were distressed. First-time homebuyers comprised 33 percent of sales.