Another Month, Another Sales Slump...

For the fourth month straight, existing-home sales slid, the National Association of REALTORS® (NAR) reports. Activity declined 0.7 percent in July, to 5.34 million, down 1.5 percent from the prior year. Inventory rewound, as well, down 0.5 percent to 1.92 million. 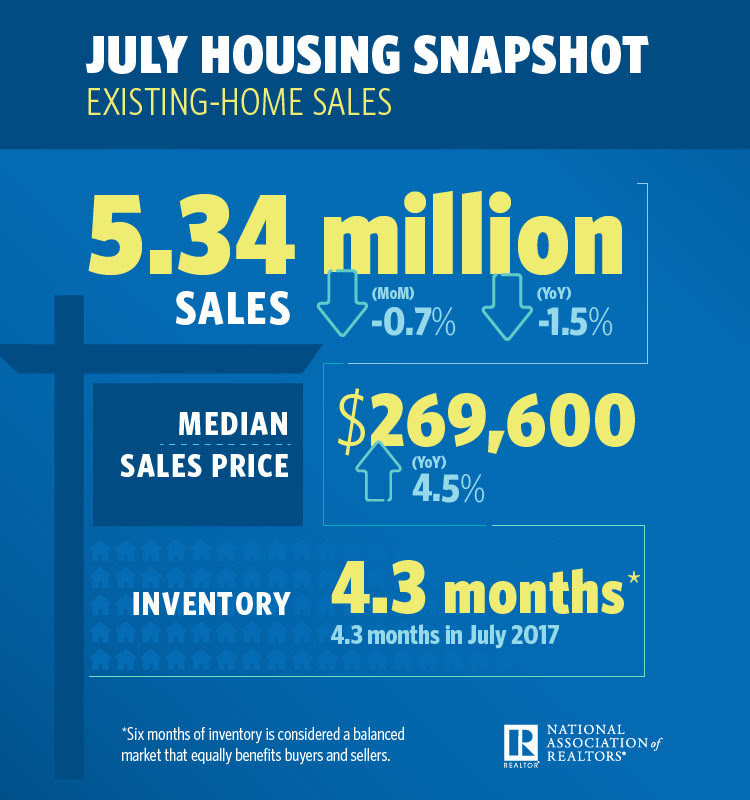 “Led by a notable decrease in closings in the Northeast, existing-home sales trailed off again last month, sliding to their slowest pace since February 2016 at 5.21 million,” says Lawrence Yun, chief economist at NAR. “Too many would-be buyers are either being priced out, or are deciding to postpone their search until more homes in their price range come onto the market.”

Currently, inventory is at a 4.3-month supply. In July, existing homes averaged 27 days on market, three days less than the prior year. All told, 55 percent of homes sold were on the market for less than one month.

“Listings continue to go under contract in under month, which highlights the feedback from REALTORS® that buyers are swiftly snatching up moderately-priced properties,” Yun says. “Existing supply is still not at a healthy level, and new-home construction is not keeping up to meet demand.”

Twenty percent of existing-home sales in July were all-cash, with 13 percent by individual investors. Three percent were distressed.

Additionally, first-time homebuyers comprised 32 percent of sales, an inch up from 31 percent in June.

“In addition to the steady climb in home prices over the past year, it’s evident that the quick run-up in mortgage rates earlier this spring has had somewhat of a cooling effect on home sales,” says Yun. “This weakening in affordability has put the most pressure on would-be first-time buyers in recent months, who continue to represent only around a third of sales despite a very healthy economy and labor market.”

“Despite first-time buyers struggling to achieve homeownership, REALTORS® in most areas say demand is still the strongest at the entry-level segment of the market,” says NAR President Elizabeth Mendenhall. “For prospective first-timers looking to begin their home search this fall, it is expected that competition will remain swift. That is why it’s important to be fully prepared with a pre-approval from a lender, and to begin conversations with a REALTOR® early about what you’re looking for and where.”